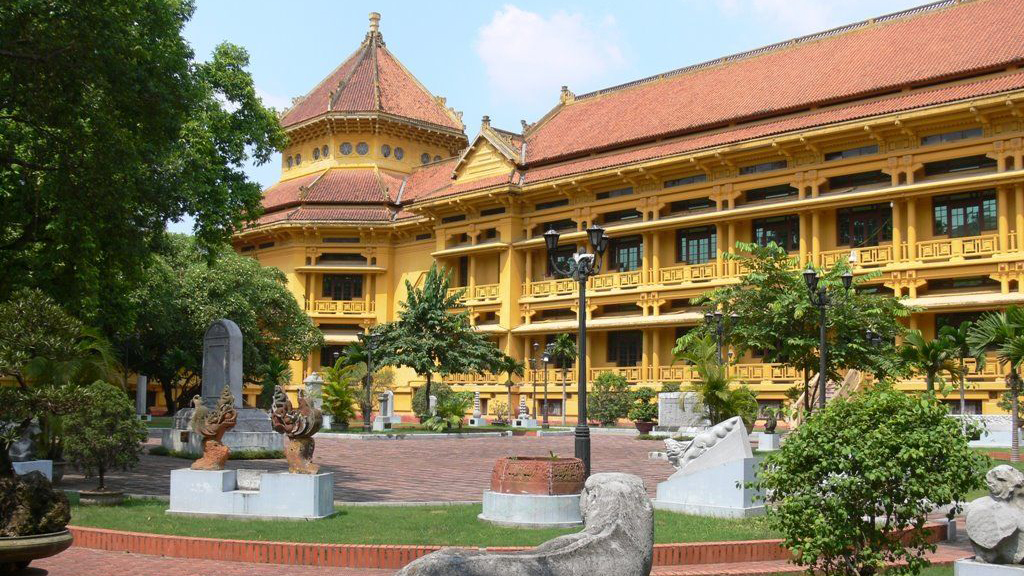 The space in between the two layers creates a natural ventilation system for the structure. The lower layer sticks out to protect the expanded doors and windows from the sun and the rain and help the museum hove elegant shade. This imposing structure can draw the attention of any visitor. The two-floor exhibition hall. Nearly 4.000 sq. m in area, has about 10.000 documents and objects on display. The first floor gives tourists on insight into Vietnam in the prehistoric time, its establishment, its development during the 1st-the 10th centuries, and its dynasties like the Ngo Dynasty, the Dinh Dynasty, the early Le Dynasty (938- 1009), the Ly and the Tran Dynasties (1009 – 14OO).

Bronze object area with o range of bronze drums like Ngoc Lu bronze drum, axes, spear points, daggers and other weapons doted bock to the Hung Kings reign displayed on the first floor of the Vietnam National Museum of History leaves o strong impression on tourists. By arranging objects in on order, the museum is telling o story of time. It plans to draw more tourists’ attention and make bigger Impacts on people’s life with specific plans.

A Dao Thinh bronze pot in Dong Son culture is on display at the Vietnam Notional Museum of History. It was discovered together with o small pot with human ashes inside. According to archaeologists, the bronze pot was buried with the dead. There are also weapons of different kinds, shapes and sizes with various patterns in this collection, like axes, lances, spears and arrows. In particular, some daggers hove handle in the shape of letter T, onions or women in short skirts.

These objects give tourists better understanding of the flourish development of Dong Son culture and the exact look at the Vietnamese society when it was first founded. Objects on display at the Vietnam Notional Museum of History not only help the Vietnamese explore their roots but also leave good impression on foreign visitors.

Objects doted to the Ly Dynasty (1010-1225) are what we shouldn’t miss when learning about the story of time here. Stone sculpture reached its peak in this dynasty with the statue of Amitabh. Buddhism was brought to Vietnam from China and India. The hair of the statue of Amitabh has typical impends of Indian Buddhism but the Kasaya has the pattern of lotus petals under Influence of Chinese Buddhism introduced in Vietnam tours.

The base of the statue is decorated with a lot of special patterns of the Ly Dynasty, like a curving dragon or a pair of dragons in kow-tow position in front of a bodhi leaf – the symbol of enlightenment. Other patterns can be chrysanthemum that symbolizes purity and waves – the symbolic representation of tranquillity.

Next to the statue of Amitabho is Lnh Xung stele dated to Thien Phu Due Vo 7 (Ly Nhon Tong -1126).
Its epitaph depicts the merits of the national hero Ly Thuong Kiet – who had raised money for the construction of Linh Xung Pagoda – and his outstanding performance in conquering the Champa and defeating the Song invaders. The steel is carried by a turtle, denoting the immortality of notional heroes’ merits. Objects on displayed on the second floor tell the story of Vietnamese culture in the Le Dynasty. Mac Dynasty’ Le Trung Hung Dynasty (1428 – 1788). Tay Son Dynasty (1778 – 1802) and the Nguyen Dynasty (1802 – 1945).